Peel Forrest is an incredibly scenic area at the base of the Southern Alps. The Rangitata river flows 120km from the Alps out to the Pacific Ocean just north of Timaru.

In 1849, Charles Torlesse was the first European to explore the area, hoping to discover coal. He called the bush Gurdon, but it was later changed to Peel Forest as a memorial to the British Prime Minister, Peel.

Above Rangitata are two mountain peaks known as Big Mount Peel and Little Mount Peel. These are sacred to the local Maori tribe, the Ngai Tahu. Legend has it that Chief Tarahaoa and his wife Huate-Kerekere were washed up ashore at Shag Point while trying to migrate north from South Otago. They wandered inland and lived the remainder of their lives where they could always see the sun go down. Upon their death, the gods changed them into mountains; Big Mount Peel and Little Mount Peel are really Tarahaoa and Huate-Kerekere, eternally inseparable. Their grandchildren became the Four Peaks, the adjoining mountain range.

The region was home to New Zealand's oldest (high country) sheep station, set up by Englishman John Acland. His descendants are still there and now run Rangitata Rafts. How times can change!

Stray stays at accommodation run by Rangitata Rafts, within Peel Forest (see this google map for the route). This allows you the opportunity to go white-water rafting on the Rangitata River and/or horse trekking. Alternatively, just relax and enjoy your surrounds. “Lord of the Rings” fans should feel a sense of familiarity, as some of the scenery here was featured in the movies. READ OUR BLOG: Class 5 rafting on the Rangitata river

Ever considered White Water Rafting? Rangitata is the place to do it! Peel Forest Horse Trekking offers trail rides throughout the year to riders of all abiliti... 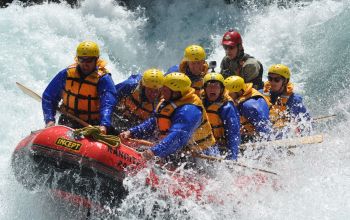 Amazing rafting opportunity too good to miss – and the best thing is that your bus stays o... 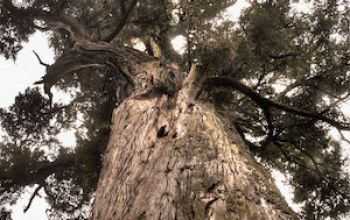 The Big Tree Walk is an easy 15 minutes each way. There are large mataī, kahikatea and low... 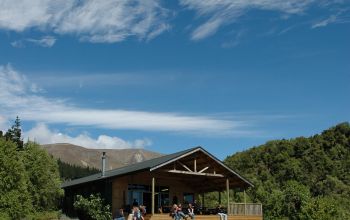 Rangitata Rafts Lodge is a purpose-built accommodation facility off the beaten track in Pe...